This post is featured in At The Christian Home Volume 2.

I have always liked baking. Especially yummy desserts. But I usually save those for special occasions. Bread is a bit healthier and is fun.

I started making bread about 10 years ago with a bread machine. After I got my beautiful RED Kitchen Aid mixer, I decided to try using it for mixing bread dough. I had already stopped baking the bread in the  bread machine and was using the dough cycle only. The mixer worked well, and I always enjoyed using it to make bread. I don’t know what it is about that red mixer that makes me happy.

I do need to clarify something about my bread making. I don’t grind my own grain, nor do I make ALL the bread for our home. I actually make very little of the overall amount of bread consumed in our home. We can get 100% whole wheat bread at our bakery thrift store for cheaper than I can make it, so I’ve stuck with that. Plus I’ve not really mastered sandwich bread. However, we like a nice fresh loaf of bread as a side dish along with dinner.

A couple of years ago my friend Y at meader family of five introduced me to Artisan Bread in Five Minutes a Day. (Not an affiliate link because Amazon.com prohibits NC residents from being affiliates. But I’m not bitter or anything.) Hmm. “That looks interesting,” I thought. But I didn’t want to give up using my mixer and kneading dough. Plus I didn’t think I’d have room to store bread dough in the refrigerator.

However the busier I got, the more appealing those 5 minutes a day began to sound. So I asked for the book for Christmas. It turns out I can use my mixer if I want to. (It just gives me an extra bowl to wash, but it’s worth it. Plus it’s easier than stirring.)

I finally got around to making my first batch of dough. I just made the basic recipe to try. Here are my first loaves of bread. (I overdid it a bit on brushing the top with flour.) 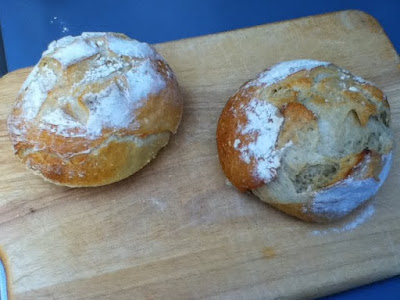 That used half of the batch of refrigerated dough. (And didn’t make enough bread for everyone to have as much as they wanted.) I left the dough in the refrigerator for a week (The books says it’s good for up to two weeks.) and made baguettes the next time. 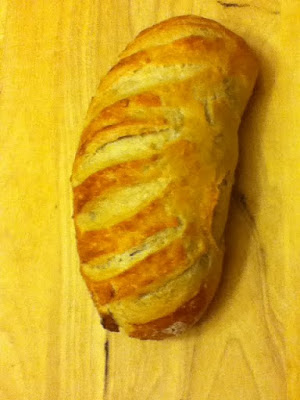 Isn’t that beautiful? It was as yummy as it looks too! The extra week gave the bread an almost sour dough flavor. And it really is quick. I am definitely hooked on this bread making method. (Sorry I didn’t try it sooner Y!) Next on the list, whole wheat bread. And figuring out how to make and store double the recipe.

13 Responses to “Breadmaking for Busy Moms”