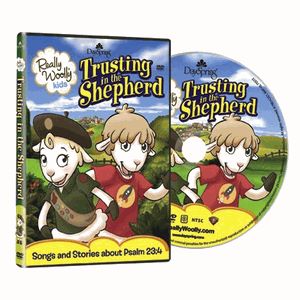 My younger children both get completely absorbed in what they watch on television. That is a good thing when I need time to work uninterrupted with my older children. I know they’re paying attention, because they will repeat things that they’ve heard on videos that they watch. So I try to be especially careful in what I allow them to watch, and how much they’re allowed to watch. (And that really should be the case whether they repeated what they heard or not, but it does serve as a good reminder of what little sponges children are.)

That’s why I was happy to receive Trusting in the Shepherd by DaySpring to review. This 40 minute DVD contains 2 different stories about facing fear and trusting in Jesus. In addition to the stories, there are a sing-along song and extra features included. Both stories and the song teach Psalm 23:4.

What did the kids think?

My almost 4 year old daughter really enjoyed the video. She liked the stories, the cute sheep characters, and the songs.

My 8-1/2 year old son watched it as well. He also liked it, but it was a little too young for him, and he tends to be on the immature side.

What did I think?

The animation was average to above average. It wasn’t Pixar movie animation quality, but it was typical for a kids’ cartoon show. The characters were cute. I liked how the story included the children talking with their parents about their fears. I thought the stories were ones that children could relate to. I wouldn’t consider this to be a kid’s video that an adult would enjoy watching, but I didn’t find it to be annoying either.

The songs were catchy tunes. One song was played with guitar accompaniment, while the sing-along song had a jazzy feel to it. I don’t consider either of them to be rock music, but they are both contemporary sounding songs. The scripture quoted was not in the King James. We are not KJV Only, but we do mainly use the King James Bible and do all our memory work in King James, so the video won’t be particularly helpful to us in memorizing Psalm 23:4. I mention both of these issues because I know that different Christian families have different opinions on music and Bible translations.

Overall, I would recommend the video for children between the ages of 2 and 6. I would consider purchasing other videos in the series. You can find more information about Trusting in the Shepherd, including where to purchase it, at www.ReallyWoollyKids.com or on the Really-Woolly-Kids Facebook Page.

Disclosure of Material Connection: I received one or more of the products or services mentioned above for free in the hope that I would mention it on my blog. Regardless, I only recommend products or services I use personally and believe will be good for my readers. I am disclosing this in accordance with the Federal Trade Commission’s 16 CFR, Part 255: “Guides Concerning the Use of Endorsements and Testimonials in Advertising.”

22 Responses to “Trusting in the Shepherd”