My family loves games.  I mean all of us, really love games.  If you want to see how much we love games, take a peek into our game cabinet. (It’s not as neat as I would like it to be but…) 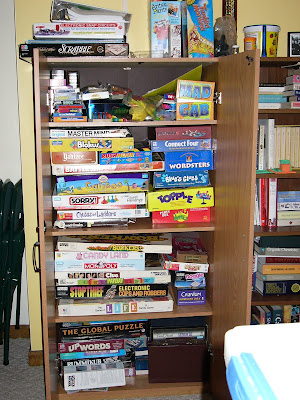 We have a family game night once a week. (Usually) So why have I not used our love of games in our homeschool?  I really don’t know, but it seems that the idea of using games to teach has been coming at me from all directions in the last couple of weeks.

The first mention of games came through a yahoogroup.  It was an invitation to join a group called Games4Learning because they had just published a new game on their group called Globe Probe.  If you’re interested in getting the game for free, then join the group here. After I joined the group I started looking at the files and found a really fun way to study state capitals: Capital Bowling.    The idea is to deal out 10 cards. Then go through the cards one at a time and see how many you get right.  If you get all 10, then you’ve bowled a strike.  If you get less then 10 (say 7), then deal out 3 cards to replace the ones you missed.  Try to answer those additional cards.  If you get them all right, then you’ve bowled a spare.  If not, just note the total correct and deal 10 more cards.   You score the game just like bowling.  I tried it with my kids with some state flash cards that we had and they absolutely loved it.  More importantly, they learned a lot more capitals.

Last week, we completed a lesson in Exploring Creation with Botany book on fruit. One of our assignments was, you guessed it, making a game.  Here are pictures of our game called Tooty Fruity (not our idea for a title, it was in the book and we liked it) 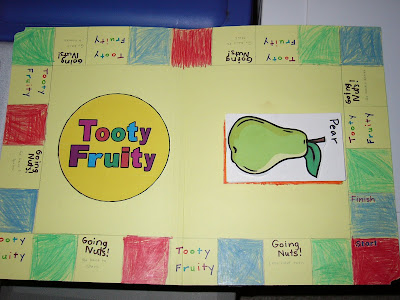 This is the board. 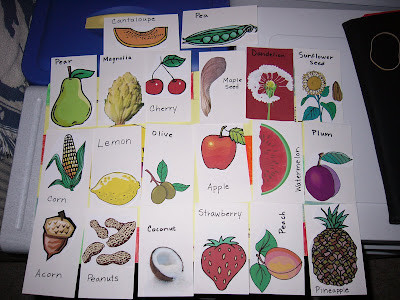 Here are the cards.
The kids and I had a great time playing the game and we also learned a lot about types of fruit. My dd was studying all the cards to memorize the types so she could beat Daddy. Cheating?? I don’t think so.
OK, so maybe I’m starting to get the idea. I went to the Scholastic Warehouse Sale. (which, by the way I love. Check here to see if there’s one near you.) I found a wonderful fraction game for my daughter called Fun with Pizza Fractions.  Not only did my daughter want to play but my son did as well.
Yesterday was my older son’s 10th birthday.  Guess what one of his gifts was.  Hmm.  Maybe another game.?? 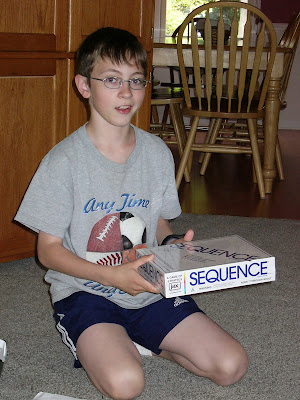 He doesn’t look too thrilled, but he does like it.
Now I’ve got to make more room in our game cabinet.
Spread the love

4 thoughts on “Using Games to Learn”