Handwriting is simple to teach. You just hand the kid a pencil and paper, show them how to form the letters, and then it’s just a matter of practice, right? Maybe that’s true some of the time, but some children will never be able to write without a lot of effort, if they’ve learned to write by visually copying models.

I have always used a handwriting program with my children as they’ve learned to write. The one that I have used actually did emphasize the strokes, but I didn’t really understand the importance of the strokes until I had a conference with Rand Peterson, the creator of the Peterson Directed Handwriting system. Handwriting needs to be automatic. If a child has to think about how to form each letter, then it will be a very laborious process writing words.

If you’re a regular reader of my blog, then you probably know that it has been a big struggle teaching my 8 year old son just about everything. Reading has been particularly difficult and after much research, I am fairly certain that he is dyslexic. He has also struggled with writing and I’ve seen very little improvement with time. After talking to Rand, I realized that among other things, he was gripping his pencil too tightly and was writing too slowly in an effort to copy the letters.

So we started with a fluency test. For the test, I instructed him to write as much of the alphabet as he could for 1 minute.  (I neglected to mention that I meant lower case.) He does know his alphabet well, so he did not waste time having to think of the next letter. Here are his initial results.

I knew it would be bad, but not this bad. It’s difficult to believe that he has been working on handwriting for almost 3 years!

I started using Peterson Directed Handwriting and did another fluency test after 11 school days.

I know it’s not terrific, but the improvement was a tremendous motivator for both of us. We continued with the program for 14 more school days and he took this fluency test. 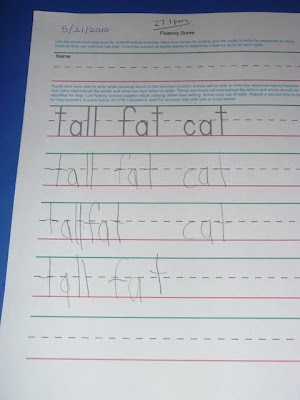 This is a different type of fluency test using words. Again, the improvement I see is very exciting. He was able to write many more letters than either of the previous tests.

I am very excited to have found a program that really seems to be helping my son learn to write. I will definitely be continuing to use Peterson Directed Handwriting with him.

Do I think that every child needs this handwriting system? Probably not.

We have been using the PDF version of Peterson Handwriting. This is available for $19.95 per level on the Peterson website.

*Stay tuned for how I’m using Peterson Directed Handwriting to retrain my left-handed daughter who has a terrible pencil grip. So far she’s been resistant to change, but I’m hoping to work on her pencil grip over the summer when she doesn’t have much writing to do.

Disclosure: This product was provided to our family for free as members of the 2009-2010 Old Schoolhouse Magazine Homeschool Crew. Reviews and opinions expressed in this blog are our own.