This week we did one of my oldest son’s favorite things—standardized testing.

I am not kidding. As far as "school" things goes, he would rather test than do anything else.  My daughter, on the other hand, had her first experience with "bubble tests" last year, and she spent a portion of the time crying. Needless to say, her scores did not reflect what I think she had actually learned.

So this year I administered the IOWA test again.  We decided that since we have to test yearly in NC, and since my daughter should have some experience taking "bubble tests" she should take the IOWA again this year. But, I did make some changes.

I did not test my children at the same time. Even though that’s one of the advantages of the test (the instructions are the same for multiple grade levels so you can test together), I administered the entire test twice. In three days.

Although it was more work for me, it definitely paid off. My daughter is a morning person, so we were able to get at least 2 of her sections done before my son even got out of bed. Last year it really bothered her when her brother would ask how much time was left and tell me he was finished when she wasn’t. So that little problem was removed. Also, the total testing time is dependent on the individual child. (I let them move on after a stretch break. If they finish a 30 minute test in 20 minutes, they don’t have to sit there for 10 more minutes. They didn’t like to have to wait for each other last year.

This year I was able to refrain from looking at every single test answer to see how they did before I sent the test off. I did check the math computation sections. My son was able to finish the computation section for the first time ever! If he had actually written done some of the problems, maybe he wouldn’t have missed them. Sigh. There’s no convincing him though.

We’ve got some interesting nature study opportunities around our house and yard.

The kids found Eastern Tent Caterpillars in our crab apple tree. Those are pretty interesting caterpillars. They change into rather unimpressive moths though.

We also got tadpoles from a friend. For now I’ve got them set up in a spare fish tank in my kitchen. 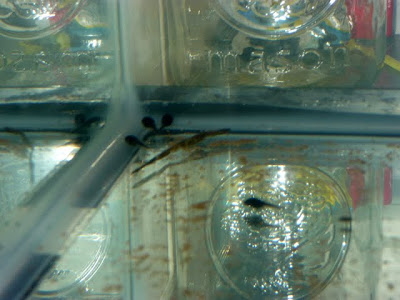 (Sorry about the weird reflections in the picture.)

When they start changing (and needing solid land) I’m planning to move them outside to our fish pond. (There are no fish in it currently. Also these are native tadpoles, so I won’t be introducing an alien species.) I am hoping that maybe a few frogs will become residents and keep the mosquito population down this summer. 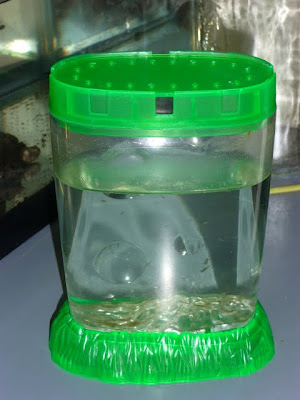 And we have a robin that has returned to her nesting site from last year. It’s right on top of a downspout under our eaves. 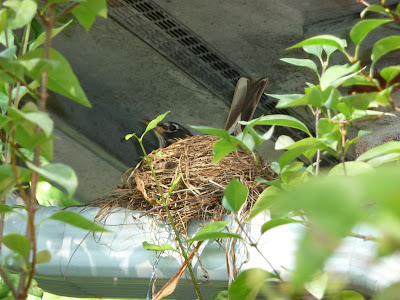