My daughter (10 years old) cannot say her r’s correctly. I first became concerned when she wasn’t able to pronounce them correctly at 5 years old, so I mentioned it to a friend who is a Speech Pathologist. She assured me that it was perfectly normal at that age, and that r is one of the trickier sounds to master. She said that after 7 years old if she still wasn’t saying them correctly, then I should look into it further.

I think it was just after her 8th birthday that I met another home school mom who was also a part-time speech pathologist. She agreed to work with my daughter for a few sessions, but we were not able to continue. By last summer, I really knew that we needed to try something. Not long after that I met Deborah Lott, who also has her M.Ed. in Speech Language Pathology, through the Homeschool Crew. I asked her a few questions about my daughter, and she offered to send me her book, Super Star R & L to see if it would help. She sent me a free copy in exchange for my review. (After that time, Deborah became one of the vendors for the Homeschool Crew  this year so I am adding my review in with the other Crew reviews.) 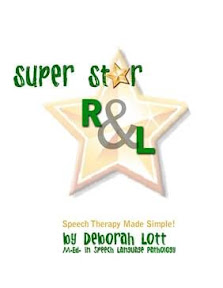 My thoughts: Right now I wish I could say that due to Super Star Speech my daughter no longer has a speech problem. However, I can’t say that yet. R is one of the hardest sounds to teach. There are helpful suggestions in the book for getting the student to make the correct sound. But we’re stuck still practicing the initial r sound (and that’s not her biggest problem area) and haven’t been able to move on. That is mostly due to my lack of diligence, which frankly I’ve been feeling guilty about. I can’t say yet whether this program will be enough for my daughter or not, but I intend to make it a priority.

Even though we are still working through the book, I have no hesitation in recommending it to anyone who has a child struggling with either the R or L sound. It is available in the spiral bound format for only $18.95. That’s less than the cost of 1 speech therapy session. And even if a child ends up still needing outside speech therapy, the book could be used for practice at home, helping the child to make faster progress in therapy. The spiral bound book can be purchased through the Super Star Speech website. EDITED TO ADD ****Deborah is running a special on Super Star Speech books purchased through her website. Enter the code TOS for 20% through June 30, 2010.**** The book is also available in electronic format from Currclick for only $12.95.

Visit the Homeschool Crew Blog to see what my Crewmates think about this book and other Super Star Speech products.