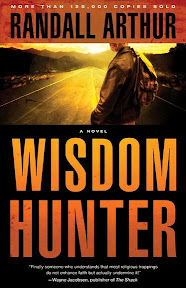 Summary: Pastor Jason Faircloth knows what he believes. His clear faith, in fact, is why he is one of the most prominent pastors in Atlanta. He relies on it to discipline his daughter, his wife, his church. He prays daily that others would come to see God’s ways as he does. And it is about to cost him everything. Groping for answers in the face of tragedy, Jason begins a search for the only family he has left: the granddaughter kept hidden from him. Soon he finds himself on an international adventure that will take him straight into the depths of his soul. He is determined not to fail again. A fast-paced suspense novel rich in spiritual depth, Wisdom Hunter explores what it means to break free of Christian legalism—and discover why grace can mean the difference between life and death.

About the author: Randall Arthur is the bestselling author of Jordan’s Crossing and Brotherhood of Betrayal. He and his wife have served as missionaries to Europe for over thirty years. From 1976 till 1998, he lived in Norway and Germany as a church planter. Since 2000, he has taken numerous missions teams from the United States on trips all over Europe. Arthur is also the founder of the AOK (Acts of Kindness) Bikers’ Fellowship, a group of men who enjoy the sport of motorcycling. He and his family live in Atlanta, Georgia.

My thoughts: Wisdom Hunter is a fast-paced, exciting book. I read the book in just a couple of days because I did not want stop reading it. It was not only exciting, it also forced me to think about my preconceived notions of how a Christian should look and whether those ideas are based on the culture instead of the Bible. I agreed with the author that living a life filled with legalism is not God’s plan for His children. However, I did not agree with the author’s implication that everything about the way we do church needs to change. There is nothing inherently legalistic about a traditional worship service with singing and preaching.  In Wisdom Hunter the author presents an idealized picture of a church with discussion and exchange of ideas instead of preaching. I think there is certainly a place for discussion among Christians, but I also believe that the Biblical model for church is built around preaching from the Word. (Nehemiah 8:8, Acts 2:41-42)

Visit the Random House website for more information or to purchase Wisdom Hunter. 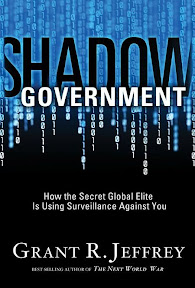 Summary: Security cameras, surveillance of private financial transactions, radio frequency spy chips hidden in consumer products, eavesdropping on e-mail correspondence and phone calls, and Internet tracking. No one is protected, and privacy is a thing of the past. An ultra-secret global elite, functioning as a very real shadow government, controls technology, finance, international law, world trade, political power, and vast military capabilities. These unnamed, unrivaled leaders answer to no earthly authority, and they won’t stop until they control the world. In Shadow Government, prophecy expert Grant Jeffrey removes the screen that, up to now, has hidden the work of these diabolical agents. Jeffrey reveals the biblical description of Satan’s global conquest and identifies the tools of technology that the Antichrist will use to rule the world. Readers will have their eyes opened to the real power that is working behind the scenes to destroy America and merge it into the coming global government. Armed with this knowledge, readers will be equipped to face spiritual darkness with the light of prophetic truth.

Author bio: Grant R. Jeffrey is the internationally known prophecy researcher, Mideast expert, and author of Countdown to the Apocalypse, The New Temple and the Second Coming, The Next World War, and twenty other best-selling books. He is also the editor of the Prophecy Study Bible. His popular television program, Bible Prophecy Revealed, airs weekly on TBN. Jeffrey earned his master’s and PhD degrees from Louisiana Baptist University. He and his wife, Kaye, live in Toronto.

My thoughts: Though this was not my favorite book, it was not entirely the fault of the author. I struggled through this book because many of the subjects it contained were not of particular interest to me.  I read with some interest about all the secret alliances, new technology capable of tracking people, and new weapons technology.  While I do believe in a literal anti-Christ and in a coming one-world government, I was left wondering what to do about all of the information pertaining to the "shadow government."  If Mr. Jeffrey believes, like I think he does, that the one-world government, led by the anti-Christ is an unchangeable fact of the future, then how does this knowledge help us? What is the call to action? I’m reminded that most Christians throughout history have believed that they were living in the last days. I think God designed it that way.  I do see the author’s point that all of this new technology does seem to facilitate many of the aspects depicted in Daniel’s 70th week, but merely making these things possible does not necessitate that the events of this prophecy are imminent.  I think that many readers will find this book fascinating, but they will be left to themselves to figure out what to do with the information.

Shadow Government is available to purchase at Random House.

Disclosure: As a member of the WaterBrook Multnomah Blogging for Books program, I received both of these books for free in exchange for my honest review.