I have a confession.

I am an absolute jinx when it comes to science experiments.

I think it all started when I set that towel on fire in Physical Science in the 9th grade. Strangely enough I went on to get a degree in Chemical Engineering. That’s a lot of science labs. One of the things I’ve gotten pretty good at over the years is figuring out the possible sources of error in the lab experiments.

Well, I struck again this week when we tried to demonstrate how dinosaurs could support more weight than lizards because of their different structures. We learned in our Zoology 3 – Land Animals of the Sixth Day text about how dinosaurs’ legs were under their bodies, but lizards’ legs extend more to the sides. The demonstration seemed simple enough. It involved toilet paper rolls and clothes hangers. The clothes hangers are cut, then bent: 4 that went out a long way before going down to resemble lizards, and 4 that went out a little way before going down, to demonstrate dinosaurs. Each of the legs were poked into the side of the toilet paper tubes. The idea of the demonstration was to push on the “backs” of the dinosaur and the lizard and note how much more stable and able to support the weight the dinosaur was with its hip structure.

We also lacked the correct tools, or maybe it was just strength we lacked. We were unable to cut our wires precisely the same length or bend them at exactly the same spot. And the portions of wire that were curved were difficult to straighten. So the legs weren’t the same length. Not exactly a recipe for stability.

In addition, when we poked the legs into the side of the tubes, they weren’t always exactly opposite one another and there was nothing to keep them from rotating inside the tube. However, even fixing all these problems, I’m still not sure that these creatures would balance on 4 clothes hanger tips. We could kind of, sort of, get them to balance, but there was no way we could compare the sturdiness of the structures. So even though the materials were inexpensive and readily available (two things I appreciate in science experiment materials), I don’t think they were a good choice for this demonstration. 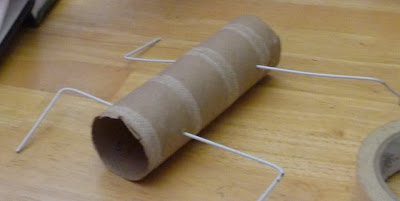 This is our lizard, not standing up.
Then, in a rare moment of creativity, I had an idea.

Using K’nex solved the problems of different lengths of legs, different angles of attachment, and rotation. We even added little feet at the bottom so that the structures would balance more easily.

So we happily built dinosaurs and lizards out of K’nex. And, it worked! We were easily able to feel the difference in how much weight the dinosaur would hold versus the lizard. 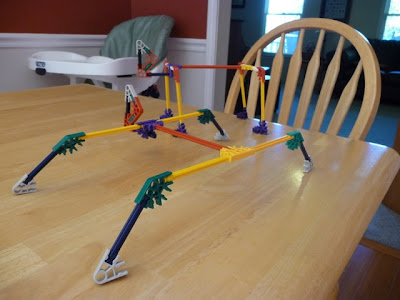 My older son’s creations. (He decided these creatures needed some sort of head too.) 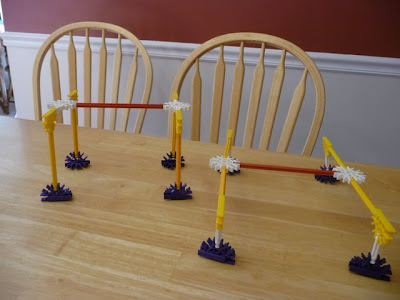 Moral:
When experiments fail, first think of why they failed, then think of ways to correct those problems. Even if you can’t redo the experiment, the thought process itself is valuable.