Who was John Knox? He was a leader (if not THE leader) of the Protestant Reformation in Scotland. That is about the extent of what I knew about him. I also had a sort of vague idea that most of the modern history books aren’t too kind to him. 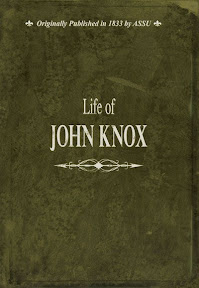 That was before I read the recently republished book, Life of John Knox, originally published in 1833 by the American Sunday School Union. Now I know more about the life of the tireless preacher of the Gospel. This short book gives biographical details of the events of his life and is sprinkled with quotes from his sermons. He was unbending in his zeal. He spent much of his adult life in direct conflict with Mary Queen of Scots, a devout Catholic, and had to flee the country several times to avoid imprisonment. His commitment to the cause of the Reformation was unwavering.

I appreciated several things about this book. First, I was glad to read about John Knox from the perspective of Protestant Christians of almost 200 years ago. I enjoy the old-fashioned writing style, and it was untainted by the revisionist history of today. Was the book unbiased? Certainly not, but is any book ever truly unbiased? I also liked that the book was short. It covered the major events of John Knox’s life without much extra. I personally need more background information on Scotland at that time, but this served as a good introduction and can serve as a springboard for more study on the Reformers. Finally, I liked the physical size of the book. It’s a lightweight hardback book that I could read in bed. That might sound silly, but I don’t have a lot of time to read right now and a heavy book that is uncomfortable to read in bed just isn’t going to be read right now.

The book is available at New Leaf Publishing, Amazon.com, and CBD.

Disclosure: I received this book from New Leaf Publishing for review. The opinions expressed are my own. This post contains an affiliate link.

2 thoughts on “Life of John Knox”