OK, I know it is ridiculous to be so tired so early into the school year, but this week really wore me out! Part of it is because I think I may have overscheduled myself. (OK, I know I have.) You remember that old commercial where the guy is at his desk saying, “I can do that. I can do that. I can do that. How am I going to do this????” That’s a little how I’ve been feeling. Thankfully a few of the things are short term commitments.

The biggest difficulty has been my son and his cross country practices. He has practices on both Mondays and Wednesdays at 7 am. (Not to mention 6 pm on Tuesday, Thursday, and Fridays and 9 am on Saturdays! He doesn’t have to attend all of them, but needs to run if he doesn’t.) Thankfully my husband drops him off in the morning, but I have to get the other kids ready to pick him up by 8! So 2 mornings this week have started by my frantically yanking children out of bed, having them throw clothes on, choke down a bite of breakfast, then run to the van to pick up their brother. Unfortunately, the practices have run late! So then I’ve ended up sitting in the van with tired, hungry, irritable kids waiting…. I did find out that I can be there at 8:15 from  now on. Those 15 minutes may make a big difference in my morning.

The good news is, we started back with Tapestry of Grace Year 2 this week. We’re picking up where we left off, so we’re starting Unit 3 which begins with Jamestown. I’ve been reading the Dialectic history selections (from This Country of Ours) aloud in the mornings for all the kids. Then I’ve been reading the Dialectic literature selection, Almost Home, aloud at lunch. We’re on track with This Country of Ours, but a bit behind on Almost Home. I don’t necessarily plan on doing all the reading aloud for the whole unit. (Actually, I know I can’t possibly do that.) But this time I liked the literature selection for Dialectic level better than the Upper Grammar one, so I decided to have both the older kids do the same literature.

We did one fun (and yummy) project this week. 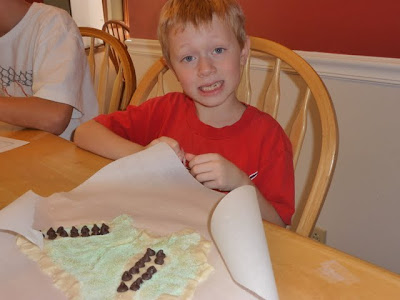 Cookie dough maps! Because I am a martyr like to cook from scratch, I made homemade sugar cookie dough. (It would work just as well with store bought.) There are maps taped to the table under the parchment paper. Then the kids spread the dough to cover the maps. We decorated with chocolate chips for the mountain ranges and green sugar. 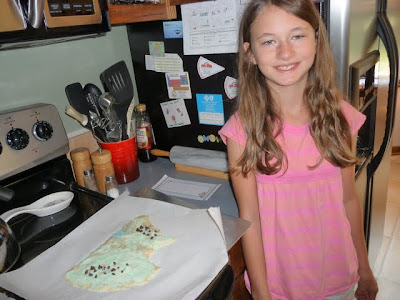 Then we baked the maps on the parchment paper on a cookie sheet. I think this is after we baked it. My daughter added blue sugar for the Great Lakes. 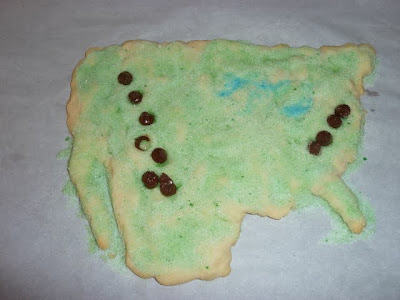 This is my older son’s map after baking. He thought the others used too many chocolate chips (like there could be such a thing!) for the mountains. He also was NOT interested in having his picture made with a cookie!

All the other subjects are going well for the older two children. Teaching my younger son anything is like pulling teeth. I’m really struggling with him. It is very difficult to get his attention.

My older son has almost finished Module 1 of Apologia General Science. I expect an “interesting” discussion when I explain to him that he needs to study for a test! My plan is to also add some science in for the middle kids this week. We’ll see. Thankfully I’ve got Monday off!