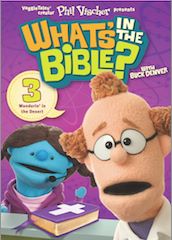 What’s in the Bible? is the new video series by the creator of Veggie Tales, Phil Vischer. The series uses puppets and music to teach Biblical truths. I received the latest DVD,Wanderin’ in the Desert from Tyndale House Publishers to review. Wanderin’ in the Desert contains 2 25 minute episodes that cover the books of Leviticus, Numbers, and Deuteronomy. These episodes discuss difficult Biblical topics like the difference between the ritual law and the ethical law (I have heard the alternate terms moral law and ceremonial law.) and why some of the punishments for breaking God’s law seem so severe. These are topics that many Christian adults do not understand, so I was impressed to see these covered in a video for kids.

My 8 year old son and 4 year old daughter both enjoyed watching the videos. They found them both funny and entertaining. My 2 older children (10 and 12) consider themselves too old for puppets, so they didn’t watch them. I found the videos to be well thought out and contained good explanations of difficult topics. But I do have a couple of problems with them.

First, I think that the content and the presentation are a bit mismatched. My 8 year old son liked the puppets, but he didn’t really grasp many of the concepts the video was trying to teach. For example, several days after watching one of the earlier DVD’s (I received a Advance Viewer Copy of DVDs 1 and 2 as well.) he randomly said “Septuagint”. I was initially impressed until I asked him what the Septuagint was. He said it was what that pirate said and the parrot thought he was sneezing.

That leads me to my second concern. The videos are a bit too silly for my tastes. I know, what did I expect from the creator of Veggie Tales? It may be that I am changing, because Veggie Tales never bothered me. But I found these to be borderline irreverent. I am not in any way saying the Phil Vischer is being purposefully irreverent. I was thoroughly impressed by his explanation of the vision God had given him for Veggie Tales and how he lost sight of that in the midst of their popularity. This series was a return to his original vision. While I really appreciate his intent with this series, I don’t plan on purchasing them for my children.

I imagine that I am in a minority with this opinion. Before purchasing you can watch short sample of the first video here.

Disclosure: This post contains an affiliate link. If you purchase through the link, I will receive a small commission.

One Response to “What’s in the Bible? Wanderin’ in the Dessert”