We’ve always planned on having our children learn Spanish. It is a very useful language to know in many parts of the U.S., including our area of North Carolina. We even purchased Rosetta Stone software when our children were younger. We haven’t made learning Spanish a priority though, so they’ve learned very little.

Even though we haven’t been actively studying Spanish, I couldn’t resist when I was offered a copy of Comic Mnemonics: A Fun, Easy Way to Remember Spanish Verbs to review. The concept was so intriguing, I knew I had to see it. I also suspected that this would be a fun way for my son who loves comics (both reading and drawing) to remember Spanish verbs whenever the time does come. 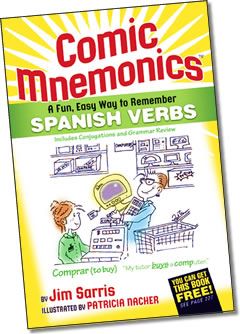 What is Comic Mnemonics? It is a supplemental resource to aid in memorizing Spanish verbs. It is not a stand-alone Spanish curriculum. It contains 100 Spanish verbs arranged alphabetically. The first page has the verb with its pronunciation and meaning, along with a cartoon picture and mnemonic. The conjugation of the verb is also listed.  On the back of each page is just the Spanish word and the picture so the student can quiz himself on the meaning. It also has practice sentences to fill in the correct form of the verb.

For example, the verb ASISTIR means to attend. The comic illustration shows a bench. In front of the bench stands a head coach and a student in a tuxedo. A basketball player is sitting on the bench. Under the comic is the following statmement. (I’ve tried to format it the same as the book.)

A few days ago, I handed Comic Mnemonics to my older son (12) and asked him to look at it and tell me what he thought. Twenty minutes later, he returned saying that he thought the comics would make it easier to memorize the verbs. As a little test, I quizzed him on the first 10 verbs. (Remember, he isn’t studying Spanish.) He was able to tell me the meanings of 8 of them after his brief look at the book. Obviously that little quiz reveals nothing about his long term memory, but I found the results encouraging nonetheless.

If you’re studying Spanish, you ought to look for this helpful guide. You can find more information about the book, including where to purchase it, at www.comicmnemonics.com. The retail price is $16.95 in the U.S. Coming soon to the Comic Mnemonics series are Spanish II, Spanish III, ESL, and French. I’d love one for Latin too! (hint, hint)

Disclosure: I received a free copy of Comic Mnemonics from Alacan Publishing in exchange for my honest review. I was not compensated for this review.