Evolution is taught as basic fact in schools. It is what all “scientists” believe. Only uneducated, brain-washed Christians believe that God created the universe and everything in it. Right?

It seems that there is a lot of division in the US and the world today. Creation versus evolution is just one of the issues dividing us. But is creation only for people who have “blind faith” in the Bible? Is evolution science, but creation religion?

Is Genesis History? seeks to show that a belief in creation does not require “blind faith” but is an entirely reasonable conclusion when viewing the evidence from a Biblical perspective. In the 101 minute film, Del Tackett visits 13 different PhD scholars in fields like geology, paleontology, microbiology, astronomy, archaeology, and Hebrew to discuss the Genesis account of creation and how the evidence that we find on earth is consistent with what we read in Genesis. In the discussions, they compare the ways that evolutionists and creationists look at the same data and come to different conclusions based on their starting assumptions. They also point out many of the inconsistencies in evolutionary theory.

The film is divided into the following sections with each one featuring a discussion with a different scientist. 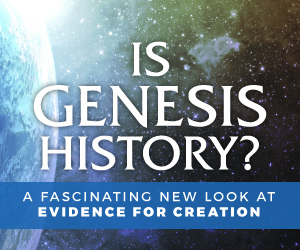 Our thoughts on Is Genesis History?

The film is well-made and interesting. It does a nice job of displaying beautiful scenery while explaining key concepts. I think the graphics are nicely done and are helpful. I like that the chapter divisions on the DVD  allow for a quick review of certain topics. The film flows well as a whole and does not seem a pasting together of individual chapters.

Our family is not new to the study of creation versus evolution. My husband and oldest son are especially educated on the topic. We have a relatively large home library of books and videos dealing with the topic of Biblical creation and evolution. So with that in mind, they had a couple of criticisms of the film.

First, neither my husband or son liked the conversational style of the video. Both of them felt it made it seem scripted, and somewhat disingenuous. I personally wasn’t particularly bothered by the conversational style, but it may grate on some. My son was particularly frustrated by the section on stars and the universe. He felt that in an attempt to keep things simple, they glossed over some very important ideas and current creationist hypotheses about how we can see starlight if the universe is only thousands of years old.

Considering that this film is intended as more of an introduction to the various topics discussed, I think that it fulfills that role nicely. It should inspire someone less familiar with creation versus evolution issues to do further research into areas that don’t seem as clear, and seek out resources that more fully address some of these difficult topics.

You can purchase a copy of the film in DVD or Blu-Ray format. A DVD/Blu-Ray combination package is also available. You can view the various options at Compass Classroom.

Are you interested in science curriculum from a Biblical creationist perspective? Try Apologia Science .

Disclosure: The links provided are affiliate links. If you purchase through the links on this post, I will receive a small commission. I received a free copy of Is Genesis History? in order to write this review. I was not compensated for this review. All opinions expressed are my own.